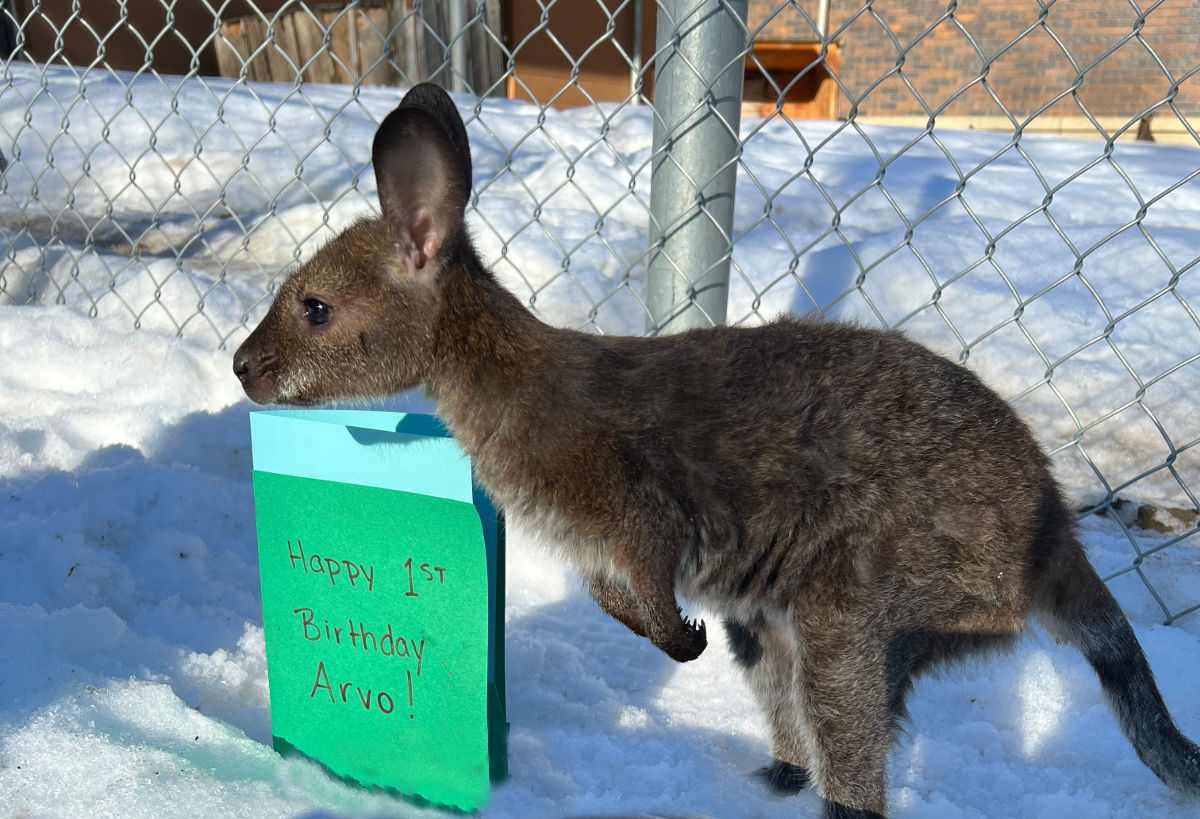 Meet Arvo! He celebrated his first birthday Feb. 23  and is a typical red-necked wallaby. He loves testing how high he can jump, somersaulting into a pouch, practising his boxing skills, and indulging in his favourite food treats (almonds, bananas, apples, and romaine lettuce, if you’re wondering).

Last July, zookeepers found Arvo in the wallaby habitat. He was pink, furless, and very small. Normally, Avro should have still been inside his mother’s pouch, growing and developing. Zookeepers attempted to reunite him with his mother, Dardy, but she continued to reject him. Using foot and tail measurements Arvo was estimated to be about five months old. Red necked wallabies stay in their mother’s pouch for 10-12 months and require their mother’s milk until about 13 months of age, so the zookeepers knew they had to act for Arvo to survive. 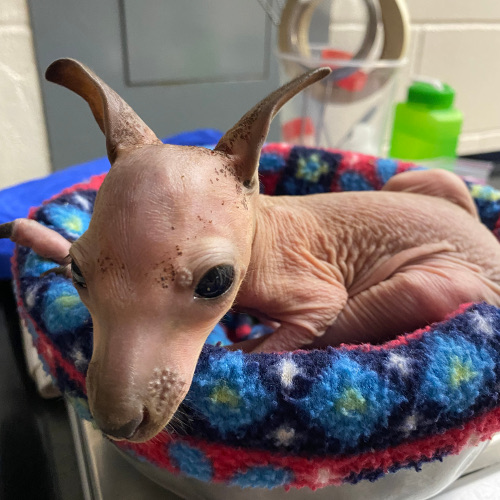 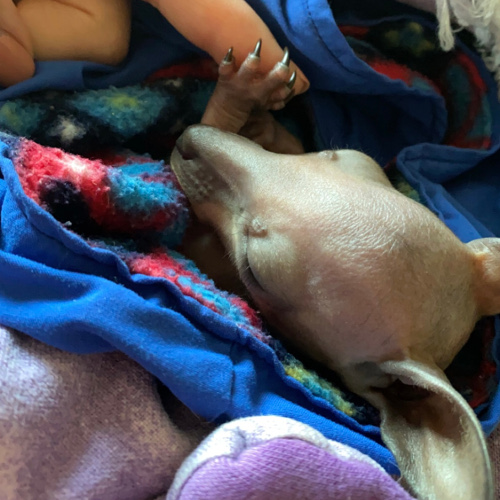 Arvo needed around the clock care, which was split between zookeepers Steph and Rachael. They were with him almost 24 hours a day for six months. And, like other wallaby joeys, Arvo needed to be in a pouch to survive – so they made their own! Steph and Rachael tried to make his pouch life as close to natural as possible so they carried him in fabric pouches worn over their shoulders. This encouraged Arvo’s proper muscle development and growth. They used bean bags to keep the pouch warm during the day and overnight, he slept in his pouch inside a temperature controlled incubator.

Aside from life in his pouch, Arvo needed to be bottle-fed a special formula every three hours throughout the day and night. Baby wallabies require stimulation by their mothers to urinate and pass stool, something that occurred after each feeding.

Arvo had some gastrointestinal issues early on that required extra care and attention from veterinary and zookeeping staff. His weight was constantly monitored to ensure he was growing at a sufficient rate. As he grew he gained confidence in exploring his surroundings and would venture out of the pouch for short periods of time. He was very uncoordinated to begin with and it took practice to get used to his big feet and tail. There were a lot of tumbles before he got the hang of hopping. As he got bigger he spent more and more time outside of the pouch and became super speedy and agile – which means Steph and Rachael also became super speedy and agile! Arvo got lots of exercise throughout the day to encourage muscle and cardiovascular development. 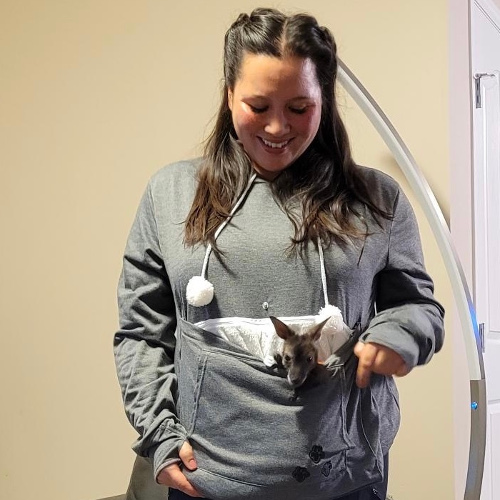 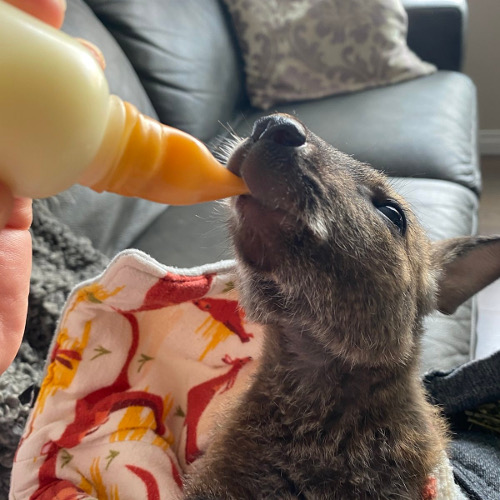 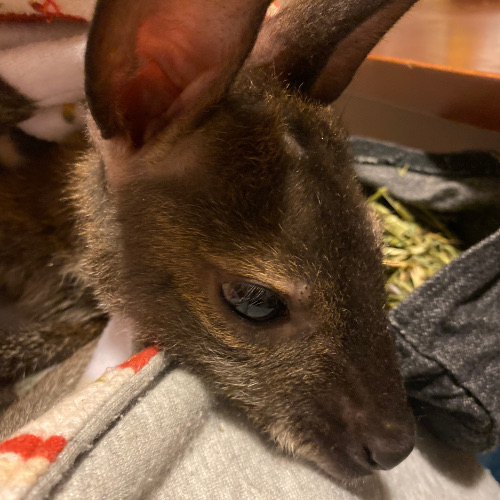 Soon, it was time to introduce Arvo to the zoo’s other wallabies. This happened carefully to give Arvo and his friends time to get to know each other. At first, Arvo would stay in his pouch but then was gently encouraged to explore the habitat with either Steph or Rachael and his pouch close by for comfort. If Arvo was ever scared or nervous he would ‘chitter’ or make his alarm call for his zoo mom to go over and comfort him. This progressed to monitored visits and then to Arvo staying with the other wallabies during the day but going home with his zoo moms at night. Finally, on February 1, Arvo spent his first full night at the zoo!

If you visit the zoo today, you may see Avro’s pouches hanging inside the enclosure. He still chooses to spend time in them during the day and often sleeps in one at night. He is still getting used to his new routine, but so far he is fitting in well with the zoo’s five other wallabies. Over time, Arvo will rely less on his pouch for safety and comfort.

Arvo’s story is just one of the many examples of our dedicated team of amazing zookeepers going about and beyond for the animals in their care.

Next time you’re at the zoo, stop by to say hi to Arvo! He has a huge personality and is impossible not to love! 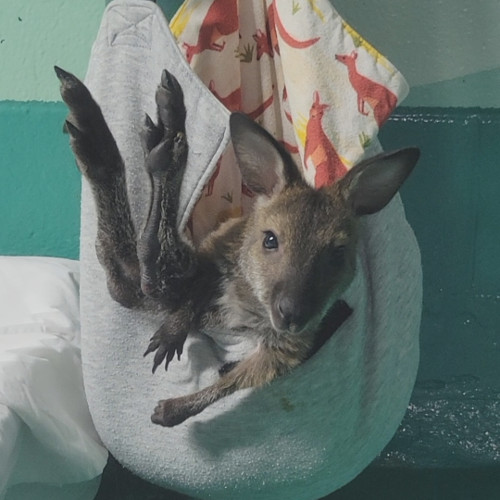